The water monitor lizard, Varanus salvator, is a large, ecologically flexible species commonly found in areas of human disturbance throughout its Southeast Asian range.  The presence of anthropogenic resource subsidies is likely to influence V. salvator behavior in such areas, potentially altering the social structure, ranging activity, and space use of this species.  Overlapping human and V. salvator activity areas also create the potential for increased human-V. salvator conflict.  My dissertation research involved the use of behavioral observations and radiotelemetry to study V. salvator in an area of regular anthropogenic subsidy in Banten, Indonesia.  I also conducted interviews with area residents to document local perspectives and knowledge and to identify concerns regarding V. salvator and other native herpetofauna.

​My data suggests that on Tinjil Island, Indonesia, a dominance hierarchy exists among V. salvator frequenting the area of anthropogenic subsidy.  In addition, V. salvator activity areas appeared to be smaller in the dry season than in the wet season, when the island’s natural water and prey resources were more abundant.  Similarly, V. salvator on the island showed increased use away from areas of human activity in the wet season, indicating that despite the subsidies being available year-round on Tinjil Island, V. salvator behavior varies temporally; foraging may only be focused on human subsidized areas in times when natural resources are less available.

Through the interview process I learned that a local taboo prohibits the collection of V. salvator and Python reticulatus on Tinjil Island, but that the taboo is not observed in the nearby mainland villages, Muara Dua and Cisiih.  In the villages, V. salvator is mainly considered a pest, but the meat of this species is also consumed for medicinal purposes. 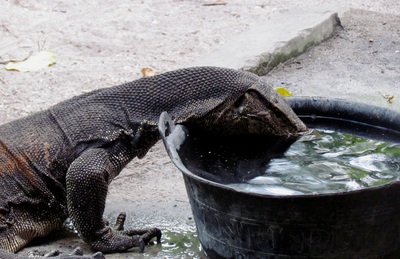 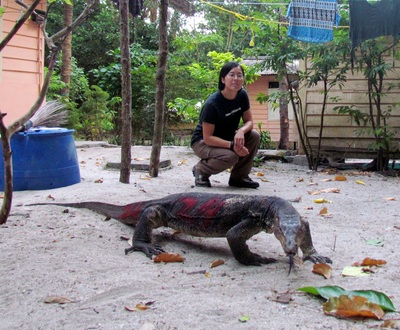 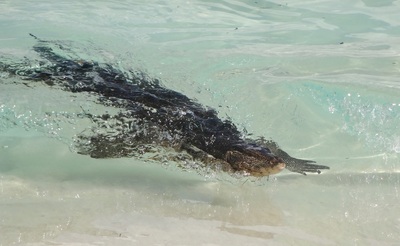 Conservation and Breeding of the Chinese Crocodile Lizard, Shinisaurus crocodilurus 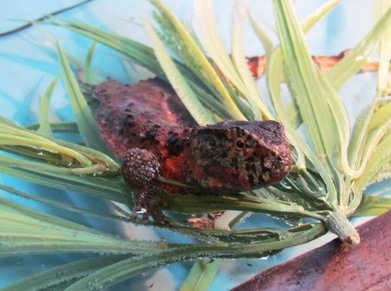 Adult male Shinisaurus crocodilurus - Photo by Linda Uyeda
The Chinese Crocodile Lizard (Shinisaurus crocodilurus) is a native to China and the Quang Nihn province in Vietnam (Le and Ziegler 2003).  Since 1978, surveys conducted in China have documented a rapid decline in Shinisaurus populations with the total estimated Chinese population decreasing from 6,000 individuals in 1978 to 950 individuals in 2008 (Huang et al. 2008).

Poaching for pets, food, and medicine is considered the greatest threat to wild populations, with habitat destruction and local environmental changes also playing a role in the populations’ severe decline. According to Huang et al. (2008) the price for a single Shinisaurus is easily the equivalent of two-month's salary for one person in the remote mountain areas where the species is found.

Woodland Park Zoo (WPZ) has continued a successful captive breeding program, producing over 60 viable Shinisaurus ​offspring since 1996.  In 2011, I collaborated with WPZ zookeepers to document effective captive propagation efforts, adding to the body of knowledge on this species (Uyeda and Yoshimi 2011).
​
​WPZ zookeeper Diane Yoshimi and I were invited to present our results at the Daguishan International Symposium on Protection and Breeding of Shinisaurus in Hezhou, China, November 5-6, 2011.  ​You can read Diane's WPZ blog post about our trip here:  http://blog.zoo.org/2011/12/panda-of-lizard-world.html

Since the first international symposium in 2011, Shinisaurus crocodilurus has been listed as Endangered on the International Union for Conservation of Nature (IUCN) Red List (Nguyen et al., 2014).  Another important development is the documentation of morphological and genetic differences between Chinese and Vietnamese populations, leading to the designation of a Vietnamese subspecies, Shinisaurus crocodilurus vietnamensis (Van Schingen et al., 2016).

In 2019, Diane Yoshimi and I were able to attend the Second International Symposium on Protection and Breeding of Shinisaurus in Hezhou, China, where recent advances in Shinisaurus research and conservation efforts were discussed. 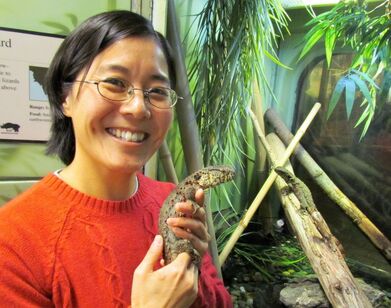 Le, Q.K. and T. Ziegler. 2003. First record of the Chinese crocodile lizard from outside of
China: Report on a population of Shinisaurus crocodilurus Ahl, 1930 from North-eastern
​  Vietnam. Hamadryad, 27:193-199.