Previously, I worked as Assistant Curator at an indoor tropical rainforest facility in Dubai, UAE, leading a small biologist team in the care and husbandry of a wide range of animals.  From 2015-2017 I was a field biologist, and helped to monitor and manage the southern California population of condors in conjunction with the United States Fish and Wildlife Service California Condor Recovery Program.  The California condor is a federally endangered species; read more about what is being done to save the California condor here:  https://www.fws.gov/cno/es/calcondor/Condor.cfm

In 2015, I completed my PhD at the University of Washington in Seattle, Washington, USA.  My research, focused on the water monitor lizard (Varanus salvator) in Indonesia, explored both community attitudes and anthropogenic influences on the behavior of this species to increase understanding of systems in which humans and V. salvator interact.  My interdisciplinary approach was based on the philosophy that an understanding of both human perspectives and wildlife ecology is essential in approaching field conservation efforts.

I prepared for my dissertation work by earning an MA in International Studies with a concentration in International Conservation in 2010 and an MS in Biology for Teachers in 2008.  The development of my language skills was also a key to conducting field research in Indonesia.  In addition to six field seasons in Indonesia, I studied Indonesian language formally for three years and was supported in this effort as a Foreign Language Area Studies (FLAS) Southeast Asia Fellow in the 2009-2010 and 2011-2012 academic years.  In addition to Zoology I have an interest in Japan; in 1995 I earned both a BA in Zoology and a BA in Japanese Language, and from 2005-2006 I lived in Nagoya, Japan.
​ 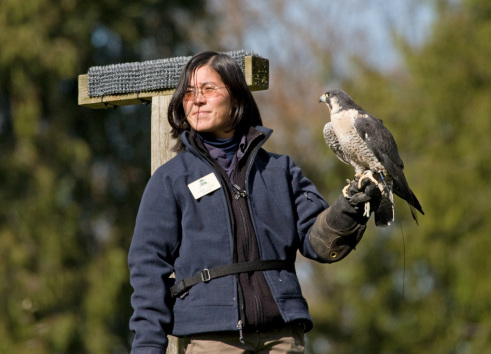 My background...
I began my zoo career training African elephants, free-flying numerous species of raptors, and presenting public educational programs while showcasing these amazing animals.  Since then, my experiences as an animal keeper have included caring for a wide variety of wildlife taxa of all shapes and sizes, including reptiles, amphibians, birds, mammals, and invertebrates.

From the age of five I spent many years dancing and training as a competitive gymnast, and I also enjoyed a 15+ year career as a gymnastics coach and choreographer.  These days, I still spend some time in the gym, but also enjoy exercising outdoors as much as possible; for fun I like to run, bike, hike, ski, snowboard, and kayak.

Considering the time spent out in remote Indonesian and rugged US field locations, I was also certified as a Wilderness First Responder from 2014-2019.
Powered by